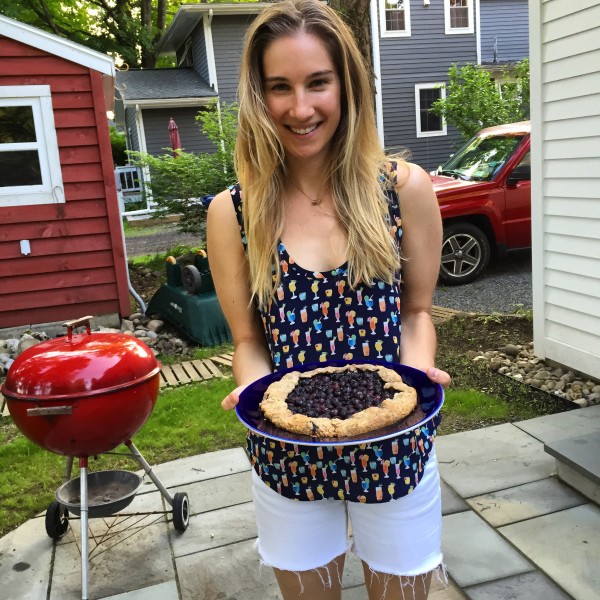 Oh HEY, July. How blissful is this summer? I hope you’re savoring every last bit!

A couple weeks back I polled you guys on Instagram to see if you were interested in learning about my 30-day sugar detox. There was a resounding yes, so today I’m sharing my reasons behind doing the detox, my approach, the results, and my plan moving forward.

Before launching into this, I want to make clear I’m by no means a health professional, nor did I follow any specific guide, book, or online program. I crafted an approach that would work for me, and that’s what I’m sharing. Whatever efforts you’re making to improve your health, I hope it helps. Ok…let’s get to it.

Overall, I’m a very healthy eater. My regular diet consists of a lot of fruits and vegetables, healthy fats, complex grains, and lean protein. But then there’s sugar. It’s always been my weakness. I fully believe in indulging here and there, but in the late winter/spring of this year, my sugar intake got a little out of control. Ok a lot out of control. I craved something sweet after every single meal (breakfast included), dessert in some form was at least a daily occurrence, and my body was feeling pretty crappy because of it. Read bloated and tired.

My friend Regina and I (both self proclaimed sugar addicts) had discussed teaming up to tackle sugar numerous times, but the conversation always sort of fell by the wayside. Or some event or holiday came up. But at the end of May, we finally bit the bullet and committed to giving up the sweet stuff for June. Not eating sugar or “no sugar” can mean a lot of different things. It’s different for everyone. I firmly believe when approaching this type of thing, you have to do what will work best for you. We went with a “building” approach, meaning that each week we expanded the types of sugar/ foods we were cutting.  Here’s how we did it:

Week 1: No desserts or added sweeteners of any kind, even if they were “natural” like honey or agave

Week 2: Same as week one, with the addition of more closely looking at labels- that meant getting rid of things like ketchup, nut butters with added sugar, processed carbs, etc.

Week 3: Continuation of week’s one and two, with the addition of being stricter around carbs in general – much less bread, pasta, etc.

Week 4: Continuation of week’s one, two and three, with the addition of no alcohol (more like a lot less alcohol :))

Here’s how I felt:

Week one, oddly enough, was the easiest. My cravings were intense, but I was so motivated to fight through them that I didn’t dare touch the sweet stuff. I was determined to rid my body of wanting a piece of candy after every single meal. Pretty instantly I had a lot more energy and mental clarity (I was able to cut my second cup of morning coffee in that first week). Overall my body felt a lot less bloated. By day six my favorite skinny jeans practically slipped on.

Week two presented my first major road block. I had a bachelorette party that was heavily centered around food. I didn’t want to be “that girl” that said no to dessert, but I really didn’t want to break the challenge. Having Regina really helped here. She was confident I could be super sly about the whole thing, and just politely decline when dessert got passed around. Thankfully I was able to do just that. The whole weekend was actually a great lesson in the importance of keeping the challenge to myself. I think more often than not, if you’re attempting to make a positive change with your health, others can feel threatened by your efforts and put them down. It’s not intentional, but it happens. People say stuff like “Just have one bite!” or “You don’t need to give something up!”. The list goes on. Again, it’s not intentional, but in my experience it can really hamper your efforts. Not making a big deal of it was a huge help to me.

Week three felt like such an accomplishment. I couldn’t believe I hadn’t had dessert in so long! Things like fruit, nut butters, and even beets, tasted so sweet. My muscles and skin felt more taught, and I was really in tune with my hunger. That last one was probably the biggest benefit I experienced from the challenge. By eliminating sugar, I became acutely aware of when my body was truly hungry or my “hunger” was just my body craving sugar. My appetite definitely wasn’t as big as I thought it was. That probably also had a lot to do with the fact that I was eating more protein.

You’d think week four would have been the easiest (we were in the home stretch!), but it ended up being the hardest. Why? My period hit. The time of the month where I always went on a sugar bender. My cravings were through the roof. One evening they were so bad I just had to go to bed. I watched Fed Up, the documentary that basically outlines sugar as the devil, to keep myself motivated. I highly recommend watching that movie if you ever want some convincing to kick the sweet stuff. The interesting discovery was that my skin, which normally breaks out during my period, was totally fine. I always blamed the breakouts on my hormones, but it was clearly the sugar. It was definitely a rough week, but I made it through.

In the weeks leading up to the end, I fantasized about what my celebratory dessert would be (there was a lot of Instagram stalking of artisanal ice cream shops). As it got closer though, I started getting nervous. I’d gone vegan for a month a few years back and my first time eating meat after a month of mostly vegetables and beans made me feel pretty sick. Knowing sugar would probably be the same, I thought it best not to lose my shit on an entire cake. Instead I opted for a ice cream - just a single scoop. I was out with good friends, it was a quintissential summer night, it was the perfect time for an ice cream cone. Going down, it felt fine, and yes, tasted glorious. Then about 30 minutes later, an intense headache began to form at the base of my neck. By the time I got home I felt awful. I immediately took two Advil and crawled into bed.

It took a good 24 hours for my system to feel like it was back to normal. My fears of falling back into cravings dissipated almost instantly due to how terrible I felt. My initial post-30 day plan was to indulge in something sugary once a week (generally applying that to special occasions). So far that’s been pretty easy to stick with, given how much better I feel when I’m not eating sugar as frequently. I’ve learned my body doesn’t react too badly if I have a homemade dessert here and there (like the blueberry galette I’m holding above!), but any sort of processed sugar makes me feel miserably sick. So long gummy candy!

One of the best decisions I made around this process was deciding to do it with someone else. Being accountable to Regina made such a difference. We celebrated each other’s successes, and leaned on each other when we thought we were going to cave. All those “well I could just have a little…” moments were much easier to avoid knowing someone else’s skin was in the game.

Even though the focus was on sugar, the whole experience put me much more in tune with my body – what it’s actually craving, when I’m truly hungry, and how I can fuel it best. That, overall, was the biggest benefit, and has helped shift my finnicky relationship with food (which is a story for a whole other post). I’m so glad I finally committed to doing this. I hope that was helpful for you guys! I’d love to know, have any of you ever done anything like this before? Sugar, dairy, meat…? xx Clara

Ps: Here’s the recipe for the Blueberry-Pecan Galette pictured above